The next morning we decide to move the camper just up the road to some free parking, rather than ask for a late check out. We moved around 8:00 a.m. Maybe only two blocks closer to up town…but we were not on any time restraints. What a disappointment as we wondered up one side of the street and then back down the other side. EVERYTHING was closed, some opened at 10, others not until noon.  Got photos of Wild horses in town, and that of the churches and school. I love the last photo in this set,  possibly the carpenter spent more time in the Saloon next door than he should have, although I’m sure its age and weather.

We found one teeny tiny restaurant open, so went in and had a coffee to kill time, and watched as the town began to wake up. Within 10 minutes the restaurant was packed with other tourists looking for a bit to eat and coffee. A group of 7 came in, Grandparents, parents and three children. I couldn’t believe it when I overheard the 2 oldest kids, maybe 5 and 7 order 7-up with their toast and eggs! Really? With things opening so late, I was not sure how long I would be able to keep Gary in Virginia City. When we left the restaurant I noticed the museum across the road was open, so that was our first stop.  They had everything imaginable. It was quite a step back in time. Every piece of mine equipment imaginable was on display.  Dolls in period clothing, cards, bullets, medicines, stoves, desks, menus, pickle jars, bathtubs, if it was used in Virginia City, they had samples there! 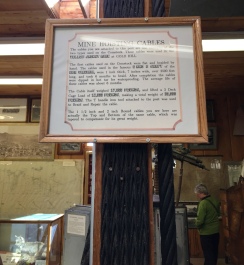 Once done in the museum, we walked out to discover that more people were around, and more shops, museums etc. had opened.  However, many of the places were not open during the off season, including the Mark Twain Museum and the Pipers Opera House, both of which I wanted to see.  Note to self, check when touristy “things” open in the spring!
Samuel Clemens  spent just a few years in Virginia City writing for the Virginia City Daily Territorial Enterprise. It was while writing for this newspaper that he first used his pen name Mark Twain.  So Virginia City is known to be the birth place of Mark Twain.    John Piper,  bought his first theater in 1868, however when the great fire of 1875 blazed through the city burning a square mile of the town, that opera house was in its path.  Several years later, he built a new theater, which also succumbed to a fire.   Again, in 1885 he built his third, and final opera house and it is the one standing on the corner of Union and B ever since. Its the one pictured in the photo below.  Anyone who was anyone wanted to play the opera house.  It never hosted opera, but had boxing, town meetings, and performers such as Al Jolson,  Harry Houdini, John Philip Sousa,  and lectures from non-other than Samuel Clemens. In 1940, Errol Flynn stood on stage at the opera house and auctioned off historic Piper memorabilia, as an introduction to his new movie Virginia City.   Apparently this opera house is also haunted…  but from outside, we didn’t see it as being anything other than a beautiful, old building. 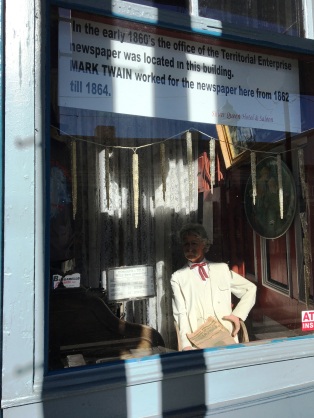 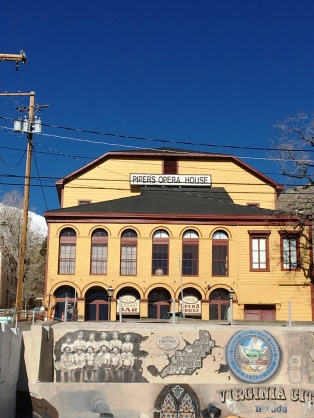 We did get into the famous Washoe  Club. According to the show “Ghost Adventures” and “Ghost Hunters” it is one of the most haunted places in the West.   We didn’t go on the tour that covers all three stories of the building, but we did go inside and saw the bar, the pool room and the back parlor, as well as the crypt.  No, we didn’t see, feel or hear anything out of the unusual this time either!   In its day its members were the elite of the elite, and it was quite the place to be seen.  You can find more history, which I found to be exceptionally interesting  here.  Although others felt they could sit up at the big old bar and have a “cocktail”, just like the 7-up kids, I didn’t think it was appropriate for me to do that at 10:30 in the morning but what a grand place. 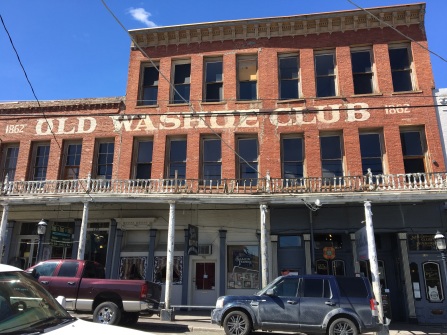 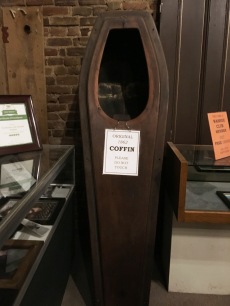 Before leaving town we went into the Palace Saloon for lunch before hitting the road.  It was fantastic food, and the atmosphere was absolutely stunning, with the old bar, and photos everywhere.  It was another instant trip back in time, you could almost imagine the activity during the rush. 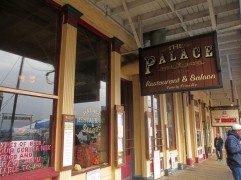 With full bellies, and longer in Virginia City that someone wanted to be, we hit the highway heading north towards Reno.  The road was as twisty and winding as it was going in.  But soon we were over the hills, and going down into the Valley with Reno in Sight.

We drove on the outskirts of Reno, following 395.  Just north of Reno we passed White Lake.  I thought it was dried up mud, but it was waves, on very white muddy water.  Was the strangest sight that obviously my camera did not pick up on.

Just before turning on 395, and heading north on Standish Buntingville road (a shortcut) we went past Honey Lake, yet another huge terminal  lake laying at the bottom of a valley. They used this valley (lake)  a bombing test range prior to world war 2 and for ordinance demolition and testing  into the mid 1950s  I was pretty amazed at how many large cattle ranches and farms were right on the road between  Buntingville to Standish.  Beautiful country, but a long ways to civilization.

Approximately  225 km behind us for the day, we find a quaint little campsite on the edge of Alturas Ca. Sully’s RV Park was just what we were looking for.  Nice little camping area, with all the facilities.  Nothing special but exactly what we needed. It was about 7 degrees, so we settled in knowing we didn’t need to use the furnace for the night again.   North to Hermiston Oregon tomorrow.