I was awake bright and early the morning, and went for a short walk in the desert to enjoy the sun. I was rewarded with beautiful views of the Sierra Nevada mountains!

Within the first few miles after leaving our camping spot we started climbing into the mountains again.   Just before loosing the views behind us, we stopped at a pull out for the spectacular views back down the valley towards Bishop, and a preview of what to expect as we continued.  Again, another beautiful driving day.

Seems as though we did a great deal of ascending and descending today.  Vegetation changed in every valley, and every mountain top….although at the higher altitudes the snow was the same!  The first lake we came across was Lake Crowly.  Absolutely stunning with the snow capped mountains behind it, and the desert landscape for its shores.  It is a reservoir on the upper Owens River.  The Long Valley Dam (126Ft) was built in 1941, on the upper Owens River creating this lake with a surface area of the reservoir being 21 sq. Km.  It is a well used lake with opening day  for fishing alone bringing  between 6 and 10 thousand people to fish, a little too crowded for my liking.  A 26 pound brown trout, was the largest caught in the lake. 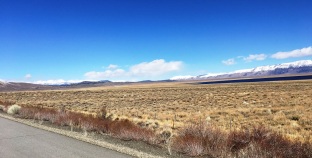 Several miles up the road, and yes, we were gaining altitude againm we come to the turn off to Mamoth Lakes.  Never been before, and we needed fuel, so we turned in.  The town is only a couple miles in, and there wasn’t a chance at getting into the gas station it was so full.  We pulled into the parking lot across the street, and I went into the drug store – I got some funny looks as I walked across the wet, snowy and icy parking lot in my flip flops! What?  I came from a warmer climate and had no intention of getting out in the snow!  Once we crossed over into the gas station/convenience store and I realized why it was so busy.  There was a mini mall that shared the tiny parking lot. They ran snowmobile tours, and also rented skies etc.  Probably crowded all day long. It wasn’t long after we left Mammath that we were rewarded with a beautiful view of Mono Lake.

This lake is very large, and coming down from the mountains, you can see just about all of it.  It covers approximately 180 sq. Km. and is 15 km long.  The Lake formed at least 760,000 years ago and as is Crowley Lake, is shallow  with a high saline content and is considered a terminal lake, with no outlet to the ocean.  There are three creeks/rivers that flow into the lake,  and the water basically evaporates and leaves the salt behind on the shores.

Next time,   I would plan to stay the night close by in the town of Lee Vining and do some hiking and exploring.  Looks very interesting.  But onward hoe and up over yet another mountain of snow and back down the other side into more desert like conditions.

Back down into the desert, farmlands and forests we go past another beautiful lake,

Topaz Lake.  Again, a reservoir which was created by damming the West Walk River in 1922 which had the water backing  up into a smaller, natural lake.  The existing lake covers approximately 2410 acres.  The Nevada Government stocks the lake with trout, and it is also popular for boaters, swimmers and water skiers.  Its still winter, we didn’t see anyone enjoying the lake today! I am beginning to think that there are no actual “natural” lakes left in the state of California.

We continue on, skirting the East side of Lake Tahoe.  Obviously a place to visit on a future trip, later in the spring or summer.   We follow 395 into Carson City, and then head East on 50 before turning north again on 341 to Virginia City.   We came to a  Y  in the road,  and with warning that large, or heavy trucks, campers etc. continue to the right, that’s the way we went.  Not sure why it was the truck route… it was narrow, steep grades and there were corners that we could see our tail lights on Needless to say we did join up with the main road again, but we did miss driving through Silver city and Gold Hill.  Next time?

Virginia City sprang up in 1859 with the first major silver discovery in the United States. During its hey day, mid-1870s the estimated population was in excess of 25 thousand, however 8 years later it started to decline and now is less than 1000.

There is so much history in this little city, it was as though one had stepped back in time driving down main street in search of our camping spot for the night. I couldn’t wait to start exploring.  We got our spot in the Virginia City RV Park,  and as the attendant promised, “…its a site with a beautiful view –  of the cemetery”.  That it was, although we did have to look around a few pine trees!

It was 4pm by the time we got plugged in, heater on high and set up. We expected town to shut down around 5, as most things do this time of year, so elected to visit the cemetery instead. We shall leave exploration of the town site until tomorrow.  It was about -5 when we headed down the hill to the Silver Terrace Cemetery and wonder around while the sun was still shining.

This cemetery was not the first in Virginia city, however, as the population increased, so did the need for a larger area than what was being used.  The Silver Terrace Cemetery is located below Virginia City on steep side hills, lacking almost all vegetation. In the beginning of the 1860’s groups established burial yards on this hillside, it was closer to the town site and easier to perform funerals, which with underground mining, were an almost daily occurrence.  The Masons, Knights of Pythias, Firemen, Roman Catholic, and the city and county among others all had their areas to bury the deceased. Most of the graves are fenced or surrounded by some sort of boarder, being wood, cement, steel etc. which was typical of the Victorian period. The characteristic features of this burial place reflect the extent of styles during its long history. Markers are made from all types of material,  wood, which most are no longer decipherable,  metal, granite and other cut stones. Very few of those buried in the cemeteries were born in the State of Nevada. Many were not even born in the United States. Birthplaces from all over the world are found here. It seems Canada had a great deal of miners relocate to Virginia City, which would have been relatively easy to access, compared to those from overseas such as did Irish, which there are also countless graves. Life was hard in the mining community for everyone, including children.  Many infants and young children buried in these cemeteries, on occasion several children from the same family.  With such poor, primitive medical care measles, scarlet fever, diptheria and such would run ramped through the town killing many of the children.  But some people lived to the ripe old age of 80 years old, which was not common back in the 1800s.

Weathering, vandalism, theft, and the lack of maintenance  have all taken their toll on these cemeteries.  It unfortunate that so many graves are unmarked (maybe they always were) or that the headstones are no longer legible, however, The Comstock Cemetery Foundation is in the process of cleaning it up to give those laid to rest there the beautiful resting place it once was, and which they deserve.