With  laundry done, groceries (including 2 bottles of Gravol), and beer in the camper  we were ready for the next half of this adventure, Fishing.  We left Prince Rupert in, you guessed it,  the rain.   I will admit, I had a little anxiety about our fishing trip.  We’ve been with our  friends to the Work Channel a few times fishing in the past, but I never boated out the  50 or so Km  to the open ocean.  I always stayed in the channel prawning/crabbing and when they went to the open, I stayed at camp and read, hiked, and painted. I enjoyed the peace and quiet! Now the time has come to pull up my big girl panties and give that open ocean a try.  There is a floating camp at the mouth of the work Channel, and we had reservations for 3 nights.  As it is close to where they fish,  I was assured if I got  sick, it would only be a 5 – 10 minute trip back to  camp.

We got to the campsite only 15 minutes before our friends arrived.  It was raining lightly, and much to my delight the Eagles were everywhere.  Once Kevin and Deanna arrived we set up camp, and then launched the boat to set a few traps.  Unfortunately we didn’t get a good haul,  although we did get a taste of prawns for dinner! They had brought some firewood with them, so we enjoyed dinner under a tarp with a nice warm fire burning.  First fire we had on the trip, without dry wood, or a lot of other fuel, no way to get a fire burning in these parts of the province.  The next morning we loaded up our gear for the next few days, sleeping bag, food, beer (hardly enough as I tried to explain to Gary!) GRAVOL etc.  and headed out to find the traps we set the night before.  It was extremely foggy, and having the GPS helped find the buoys we set out the night before.  Again, enough prawns for a snack for us all, didn’t catch many but they were big,  and a few crabs, that were either female, or too small.

Once the traps were pulled, and readied for another spot we headed out to the open ocean.  It was pretty slow going as we couldn’t see much at first, but as we got further out the channel the sun began to shine and it turned into a  beautiful day.

We stopped at the Victory Cove floating camp to drop our gear off, and check out our place for the next three nights.  Its pretty rustic, but has all the comforts of home.  It has just been bought by new people, and they are extremely enthusiastic about their whole venture.  Next week they are hauling the whole camp to Prince Rupert and will do some major renovations to it over the winter.  It should be there by the time I’m writing this, It would have been interesting to see the move, as I know, it can get pretty rough out there.

So off we go, into the open to see if the salmon are going to be any more cooperative than crabs and prawns.   First riggin’ up the rods, and then get them in the water…Gary hadn’t even got his rod into the holder, and got a bite!  Yup brought in a big ol’ salmon.  The next one, only a few minutes later I got to bring in.  They are coho salmon, so apparently don’t fight as hard as others, but it was a thrill to bring in my first salmon, ever!  It was a very successful day, catching 7 with only 1/2 a day out, and that isn’t counting the ones that got away, or were too small.   We did catch a few “bait” fish, and one huge red snapper that we ate, surprisingly it was very tasty.  If 1/2 a day on the boat produced this much, what are 2 full days going to produce?

I was so surprised that I did so well out there.  I did take a gravol, and thought I had it made.  Didn’t feel wheezy at all.  Maybe I would make an ocean fisherwoman after all!  After all that ocean air, we were all pretty tired after supper, so was an early night, and then an early morning to head out to the fishing hole.  Of course the ocean is alive with fishing boats of every description, traveling in every direction.  There are some spots of course that are known for being “good” and those spots are particularly busy.  Someone has always got to be at the helm,  although that job was mostly reserved for Kevin and Deanna, every once in awhile Gary or I would take it so they could haul in a fish or two.  The weather wasn’t too bad today, a mixture of sun and rain, and when the sun was out it was hot.  A lot more rolling waves today, and I did get feeling a little nauseous and was kicked off at camp in the afternoon.  Fishing was a little slower today, although 6 fish were hauled onboard, but as they say, that’s fishin’.    When the fish weren’t biting we were well entertained by the humpback whales.  There were several large pods in the area, and you could see them blowing  just about everywhere you looked.  We were very close to them several times, not that we tried to be, we just happen to be in their path, and the stench they emit when they blow is so rank!  Who knew?  And the noises we heard from the pods on occasion were so strange, almost like a fog horn.  I knew whales “sang” but not sure I’ve ever heard that noise on National Geographic films!   We did see a few totally breach, but of course the camera is never ready for that split moment that it occurs, and if it is ready…you are usually pointing it in the wrong direction!  But, that’s whale watchin’.

Victory Cove has everything you could possibly want for a floating camp. Their covered gazebo comes complete with couches, benches, barbeques and cooking utensils and pots, which we sadly didn’t have to use,  for cooking prawns, crab etc.    They also have freezers in which you could freeze anything that you catch, but it is done on a trust system, and fortunately when we were leaving, our complete catch was there frozen solid!   It was such a relaxed atmosphere, and everyone had stories of the day to tell, although fishing secrets were carefully kept!  Kevin was able to tie his boat up at the back of the floating camp, so was calm and quiet back there.  The dock was a great spot to sit and watch the whales in the evenings.    They would swim up the channel for a ways, and then turn around and swim back in front of the camp.

That night I was able to stay up late enough, that it was dark enough to see dinoflagellates.  These are tiny organisms that glow when the water is disturbed.  That glow is an example of bioluminescence, which is a result of an enzymatic reaction.  It was so interesting to move a stick around in the water, and see the path light up in a green/blue glow.  I’ve seen some remarkable things on our travels, but I was amazed by this.    I was surprised that we didn’t see more bears, but I suppose with the miles and miles of

coast line, there are many feeding grounds for them.  We did see one wonder down to the water line, but he didn’t hang around, merely got a drink, and headed back  up the rocks and into the bush.   Any of the bears we have seen are very shiny, I guess to the constant rain, and wet undergrowth, they stay well groomed.  They all appear to be very healthy, and Big!    Ocean fishing was a new experience for me.  I really was enjoying it, but I couldn’t seem to handle the rolling waves.  We did anchor on our last full day out to jig for halibut.  Once again, Gary was the first to pull a small one soon after we set anchor.  But it just wasn’t in the cards to continue.  The wind and rain came up, in what seemed like minutes, and it was a scramble to get the anchor up as the boat swayed from side to side, forwards and backwards in the wind.  Not sure how high the waves were, but a few sideway hits were a little unnerving for me.  In any case, the captain, with his life jacket on, was on the bow for quite some time  pulling the anchor up.  With the wind blowing the boat here and there, it was not an easy task.   Then we headed into a calmer waters to clean the one fish we caught, and head back to Victory Cove to pack up! 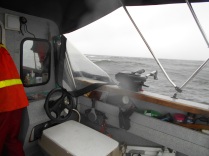 Pretty uneventful trip back to the head of the Work Channel.   We loaded up the boat, and got things put down and away in camper, and off we all headed for Terrace.  We stayed in Terrace for a couple nights while Kevin and Deanna headed further down the highway.  My brother was coming in from his ferry/ road (ocean) trip from Port Hardy to Rupert and then on to Terrace, so had a good visit with him as well.  On Sept. 3, we had breakfast with Mom, Brother and cousin and wife, and headed down the highway.  Next stop with friends at Francios Lake.   Having driven past this area so many times in the past, it was a nice stop.   The Lake is 110 kilometers long and is the second longest natural lake in  BC.  Crystal clear, and calm that evening, we were lucky enough to go out on a geezer glider (party boat) and enjoy the evening. 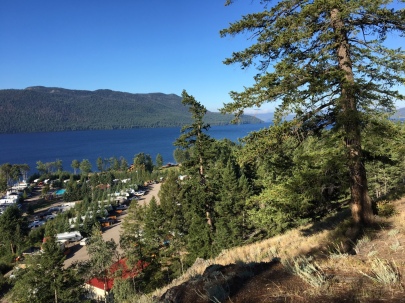 Next stop Chetwynd.  It was a wonderful experience, even the rain had its way to bring  beauty to this  province of ours.  It all adds to the adventure we were looking for.  Of course, I’m sure we would have had just as much fun and enjoyed our time in the sun – but its all part of travelling around on the North West Coast of the Province.  Best advice I could give anyone, be prepared for anything, pack as though its going to rain the whole time and you wont be disappointed with a trip to this outstanding, beautiful part of British Columbia.  Next adventure?  Many ideas rambling around in our brains.  We shall see what comes next for another trip, be it a plane, train, boat, or automobile, or maybe all of the above, it will be an Adventure.