March 10th, and time to leave this beautiful city, and adventure and head home. It has been such an experience from start to finish. We left the hotel for Suvarnabhumi Airport  relatively early, due to potential traffic problems we thought better early than late.  No problems at all so we were not in a rush when we got to the airport, which is always nice. No issues going through security and finding the departure gate so we were able to appreciate all the art along the route.  It is a very modern terminal, finished in 2006.  It is impressive boasting the world’s tallest free standing control tower at 434 feet, and is the worlds 4th largest single airport terminal at 6,060,000 sq. feet.  In 2012 it had 53 million passengers pass through, making it the 6th busiest in the country (12 in the world).  In 2012 the terminal had more photographs taken and posted to social media than any other airport in the world.  Having been there, I can understand why!  It is beautiful, AND it has a DQ!

Once we found our gate we wandered back to the DQ and had ourselves a small blizzard! Not the Mango Sticky Rice!    The trip to Hong Kong was uneventful, and with only a two hour layover we were onto an Air Canada Flight to Vancouver.   It was only around 7:30 pm, but it looked horrible outside.  Wasn’t raining, it was actually very warm out,  so think a little fog, and a whole bunch of smog! It wasn’t quite as fancy as our flight over on All Nippon Airlines.  The All Nippon had the new windows in their planes, changed color automatically to help with the jet lag, Air Canada made everyone shut their blinds, and played around with the lighting!   One steward actually got angry with a kid that opened his blind to look outside!  It was daylight, why wouldn’t a kid or adult for that matter, want to see what’s below, land or ocean.   It was basically daylight from the time we left, until we landed in  Vancouver.  I Guess we were going back in time! 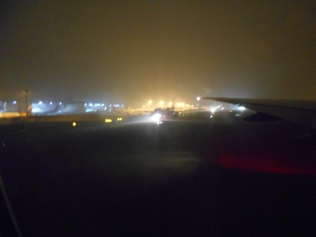 A couple hours before we landed Vancouver we were served breakfast and coffee etc.  Again, a strange concept to me as the local time was getting on to supper.  But I again, its to help with the jet lag! Maybe if I get to be a seasoned traveller this will not be quite so odd for me.   After 11 and a half hours in the air we landed in Vancouver, BC  Canada!  We only had a a couple hours lay over, which was taken up mostly  going through customs, and we were off to Calgary for the night.  We stayed in the same hotel as when we left Canada, and I highly recommend the Clique Hotel.  Can’t say enough good about it, exceptional service, room, restaurant/pub and a very affordable stay!  We will definitely stay there on our next overnight in Calgary. Kendal and Kyle were arriving in Calgary sometime around 6 am on their way to Las Vegas.  We did not meet them at the airport, we didn’t have to fly out until  11 or so.  They had taken our car to the GP airport, and locked the keys inside!  We have programs on our phones, so as long as they worked, it would be no problem.  Yes…arrive in GP and the phone started the car, and opened the doors, so we were good to go out to Ashley’s.  No headaches on the way home, so happy for that.  Our luggage was with us the whole time, never lost it once, which was awesome.  Although again we found we packed an over abundance of cloths!  I believe we could have made due with much smaller suitcases.  As we travel more, I will maybe get used of it, but laundry was very inexpensive in all the hotels we stayed,  so next time I would probably make do with a carry on, and a big purse with toiletries!    Not surprisingly we saw how much different things are on the other side of the world, and how spoiled we have become in terms of everyday “things” that we possess, possessions really are over rated in North America. We spent a good deal of time on buses and our CEO was very forthcoming with rituals, customs and daily life in this part of the world.  So much different that what we are accustom to, yet so much less stressful.  I wanted to share a few photos that we thought were interesting.  (And don’t forget, if you click on a photo, you can enlarge it after its opened, just scroll down and open “view in full size”    Some of the photos throughout this blog  (signs, and palaces, temples etc) it is much easier to see the  intricate details.)

One can not take for granted how to use something

All American Toilets come with a bidet, of sorts. but no towel?

We had so many experiences on the adventure and we took thousands of photos, and only posted a handful.  There is nothing like being there and experiencing all of these things yourself, good and bad.   The smells,  customs,  religion, history, and the people are memories not soon forgotten.  I would go back in a heart beat, although, this world is  large, with many places to visit  and people to meet and learn from, we’ll likely head in another direction next time.