Day 15 already.  The tour is coming to an end too quickly.  Today is a day of leisure in Seim Reap, and with a full day of looking around temples yesterday,  several of us decided to head out to the Silk farm about 20 minutes out of Seim Reap.  Artisans Angkor is known as one of the finest silk producers in Cambodia.  They have 23 shops in Siem Reap, however only one is open to the public. Artisans Angkor set up the centres as a way to bring back the Arts and Crafts after the wars basically destroyed that culture.   In essence  we were able to see how silk is made, from the mulberry bushes,   to the finished products in the shop.  Artisans Angkor is a company that was initially started to  assist young rural people to find work near their home village. Its aim is to provide skills to communities and villages that have no, or little educational system.   It was a very interesting, and I think its fair to say we are now experts on silk worms, and how beautiful garments are created from their cocoons. Those hungry little worms feed three times a day on the mulberry leaves, once they have made the cocoon, they are thrown into boiling water, and the worm dies, and the silk is then retrieved off the cocoon.  A very plain scarf with one color will take about a day to make, while those with patterns and several colors may take up to a week.  If you get templed out in Siem Reap, the Silk factory is a short, maybe 2 hour tour including driving and shopping time.  Yes, there is a fantastic shop attached to the farm, and they have beautiful things to purchase.  The prices are higher than in the markets, but here you know what you are getting.

Back into town we had time for a beer at the hotel, and then met up with the rest of the group to go for lunch at the New Hope Training Restaurant, of which G-Adventures is a sponsor.  New Hope started operating the restaurant in 2010  in which traditional  Khmer food is cooked and served by the students, under the supervision of a former head chef of the Foreigners Correspondence Club.  The idea of the program, which has been extremely successful, is to educate the students not only in the art of cooking, but also other aspects of the hospitality sector that will benefit them and their families for years to come.  I have to say the food was exceptional, and I encourage anyone going to Siem Reap to find this place, you wont be disappointed!

After lunch Gary and I went to find the market and pick up a few things!  Always so interesting in the markets, and somehow we always find the food section. I did try some bartering, but I am not very good at it!  I think we probably saw just 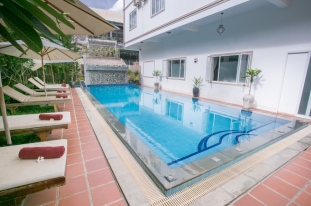 about everything imaginable so picked up some batteries etc. and headed back to the hotel to enjoy another cold beer, and a quick dip in the pool.  We only had two hotels with pools, and this was the first time I utilized one. There was just always something else to  do and see.  It was refreshing though, and now know we should have taken more time to laze about this pool.   Bangkok was a little disappointing on the pool side of things!   5pm was quad time! We actually got to drive them ourselves, after we went for a short trip with a guy on behind so he could  make sure  you listened to the instructions, and that you could operate it safely. With helmet and mask on, we headed out single file down the road, across a few busy intersections and out into some fields. I got singled out at the end of a line and had to go “slower” than I wanted to, but…that’s alright, we were all going to end up at the same place anyways.  There were about 3 guys on dirt bikes with us , and they all had 3-4 of us that they were “responsible” for, so I just puttered along behind, and actually got to look around and enjoy the beautiful scenery.  I stopped to take photos a couple times because I knew I could catch up, and he would turn around on his dirt bike and come roaring  back to check on me!   He finally realized I could drive a quad, and off we went through a field and caught up to the rest of the group!  Was too funny!  We stopped in a field and then waited for the sun to set. Beautiful hardly describes it.

Yes…Gary and I jumped, I think we were just too far ahead of anyone else so it appears we barely made it off the ground!

On the way back into town, once again I had the urge to stop and take a photo… 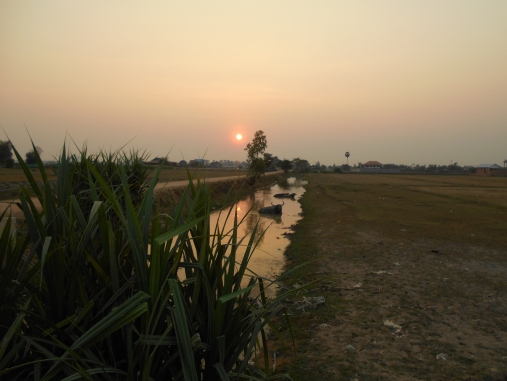 My guy came ripping back, I’m sure he thought I was crazy for taking a photo of the water buffalo, but I explained, its not something we see every day.  Then we raced along the path between the rice fields to catch up with the others, the wind sure felt great on that hot muggy evening.

Once we got back to the hotel and got the dust cleaned off,  we headed down to Pub Street with our CEO.  Apparently this is the place to go.  Although we had seen it a couple of times, we never did get back down to it in the evening.  Apparently its the number 2 (behind Angkor Wat) thing to see when in Seim Reap!  What a busy place it is.  We went to the Red Piano Bar/Restaurant which apparently is very well known as Angelina Jolie’s haunt while filming “Tomb Raider”.  Have to admit that bit of trivia we were not aware of.   After this many days, we were not surprised, it would be a wonderful spot to eat.  Again, on the second floor we were able to observe all the happenings on the street below.  And there were a lot of people, locals and tourists alike.

So ends our last night in Siem Reap.  Back to the hotel, and get organized for another bus trip across the Cambodia/Thailand Boarder in the morning.