After returning to the city, we went to our room to freshen up, and then go out for a walk before meeting up with several others  at the Foreign Correspondence Club (FCC). It was a beautiful evening, although still very warm, along the boardwalk on Sisowath Quay.   Lots of families were out enjoying their time together, and many children running about playing.  There are some beautiful islands across the river, and they are looking extremely modern with their skyscraper hotels going up, eager to welcome the tourists dollars! 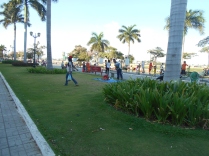 The FCC is a beautiful building that has seen a great deal of history, although, not as much as one would think as the building is not that old.  I found a great story here on its short history, and it tells the story much better than what I could.  It was a fun evening, although I think some may have taken advantage of Happy Hour a little more than what they should have, considering we had a 6 – 8 hour bus ride to Siem Reap the next morning!

What a way to bring in March, and our 13th day on the tour. Another hot sunny day ahead but thankfully another bus with air conditioning!   Its hard to believe we left Canada over two weeks ago.  We have seen and done so much, and gained so much information and experiences along the way in these countrys and with their people.  I’m sure it will take time to sort it all out.  Our trip to Siem Reap was broke up with a couple of stops.  Our first stop was at a very large popular market, full of locals and tourists alike.  Baskets, pots, pans, boxes all full of bright, colorful fruits, vegetables, flowers, breads, meat and bugs!   Yes, when in Cambodia do as the Cambodians.  Well some do, I don’t.  I used the “happy room” and came back to find Gary overly eager to try everything our CEO had picked out for a snack, and take his turn at “holding” a critter.  I had to use my zoom, as I wasn’t getting THAT close!

Once the snacks were done, and everyone had visited the “happy room” we were off again down the highway.  We hadn’t gone far when we pulled off for lunch at Tram Dung Chan resort in Kompong Thom Province, Cambodia.  Everything is outdoors, and is not quite the standard that westerners would expect for a resort, but it was great.  The food was delicious and the people most gracious.  The view was pretty nice too.

With our bellies full, we were back on the bus, and we took off again towards Siem Reap.  We had been told that we had a choice to stop at a floating village, but the whole sticky group had to agree, or we would by pass it.  Gary and I had discussed it and decided that we would rather just get to Siem Reap without any delays.  As we were nearing the turn off to the floating village, it was vote time. Gary and I wavered, we were the only two who did not hold up our hands!  We did finally succumb to peer pressure, put our hands up and we turned off the highway and headed down a dirt road to the  village. I’m not sure how far it was on the bumpy dirt road, but before long we were entering a village that lined a canal/river.  The houses were all on stilts, and they were in the middle of drying and smoking fish  caught in the biggest freshwater lake in southeast Asia.

Tonle Sap lake  is a flooded lake, with the attached 120 km Tonle Sap River which connects the lake to the Mekong River.  The size of the lake varies depending on the time of year.  At the end of the dry season the lake is about 2500 sq km (965 sq Mi).  By the time the monsoon season ends, and the Mekong River peaks the lake swells to an area covering up to 16,000 sq km (6178 sq.mi).  You may ask, how does the peaking of the Mekong River affect the lake, if the lake flows into the river?  Its simple… annual fluctuation of the Mekong’s water volume, supplemented by the Asian Monsoon regime allows an unusual  flow  reversal of the Tonle Sap River, and during the wet season, it actually flows into the lake!   The Tonle Sap Lake is in danger of over fishing. The fish from here supplies most of the country.   Governments have set regulations, and laws which if broken can lead to  jail for up to 2 years.  However, many are still overfishing, and  still fish in conservation areas and during spawning times to ensure they have enough fish to meet their quotas.  Some families have been living and fishing on the lake for generations,  but it may come to an end for many.  The floating villages on the lake mainly consist of Vietnamese, who also use the lake, for their income and survival. The fields around the lake are utilized  growing rice, and other crops for further consumption and sale.  It was a pretty enjoyable ride in the boat as well.  Got a massage, whether or not we wanted one, and an ice cold  beer, or soda!  On the way back we did have a bit of a mishap, where I think some weeds may have got tangled in the prop, so we watched as the young masseuse’ went to the back to free it.  Was all good!  The water was so dirty, I couldn’t imagine getting splashed, far less getting into it, but they seem to get into it to work, and play!  Its all good.

And to think that Gary and I initially didn’t want to make this stop.  Am I ever glad our CEO gave us a look of  “come on…it will be fun” look!  Back on the bus, we headed  out towards  the highway, passing through the village again, leaving red dust to settle over the drying fish again. Then I spotted something in front of us and asked our CEO if it was a wedding, and sure enough it was.  She had told us about the traditional Cambodian wedding so it was great to see the procession on the street! You can check out the find out more of the  4 day ritual here.  It was a wonderful place to visit, and as I said, the people were so happy.  On the way back to the highway I was finally able to get a picture of how they dry the rice, and this time of year, it is drying EVERYWHERE!

We arrived at the Nagara Angkor Boutique Hotel in Siem Reap, checked in, and then went out to explore, and find something for dinner.  Of course we found a lot to eat, but were a little picky in what we actually ordered!

The shower was awesome!

Even cheap beer…didn’t take the chance!

Don’t eat things that look at me

The food was simply scrumptious, and was enough to last us until we received our boxed breakfast, which we collectively agreed would be better than returning to the hotel, tomorrow from Ankor Wat.  We have a 3 .m. wake up call, so we can get to the Temple before sunrise!  Weather forecast was for high 30’s again for tomorrow,   lights out.