February 28th, being day 12 of our tour, was going to be what I believe, an unnerving experience for everyone in our group. I’m not sure about others, but  Gary and I had done some research into the time period that Pol Pot was in control of Cambodia, we knew of some of the atrocities that had been committed, but it was still emotional to be standing at Choeung Ek (Phenom Pehn Killing fields) and in the  S-21 prison.  Our guide, also spoke personally about the regime.  Whether or not these stories were his own personal stories, we’ll never know, they were true for someone.   Between 1975 and 1979, 2 million Cambodians, almost half the population, lost their lives during the Khmer Rouge regime.  Thousands were  tortured and murdered while others lost their lives to malnutrition, exhaustion and diseases such as malaria.    Of the over 14,000 men, women and children which entered into S-21, only 7 survived.  It’s very hard to explain everything that went on between 1975 – 1979, but I did find a 4 part series of videos  (10 minutes each)  here .  The first photo below is of a tree which they hung speakers. Loud music played during the torturous executions, so as not to provoke suspicion from people working in near by fields. Choeung Ek Genocidal Center has built a Memorial Stupa at  Choeung Ek  which houses thousands of skulls, and other bones that have been exhumed from the mass graves at this site.  Below the level of skulls and bones are several exhibits of tools, or weapons that were used to murder these  people. Bullets were too expensive to use so they resorted to using poles, sharpened bamboo or any other tool they could find to bludgeon the victims to death.   During the rainy season  bones, and teeth still surface and are collected in glass boxes throughout the area. This site was originally a Chinese cemetery, of which there are still remnants on the grounds. The field has fenced areas, and built walkways so people do not walk on the mass graves. I  was amazed at how many people we actually saw leave the walks to stroll   through the obvious exhumed mass grave sites.

As if that wasn’t disturbing enough, we loaded back onto the bus and headed the 8.5 km back into Phenom Pehn to visit Tuol Sleng Museum of Genocide (S-21 Prison).  When Pol Pot gained power he took over a school on the outskirts of Phnom Pehn and created a interrogation centre in which they tortured and executed the prisoners.  The Vietnamese invaded Phnom Pehn early in 1979, and as the s-21 staff bolted they left behind thousands of documents, including over 6500 photographs of prisoners, men, woman and children, with numbers, and dates. An aspiring photographer, 16 at the time was scared for his life, and did the job he was asked, which was to photograph every person brought into the prison.  He had to do it, or be killed himself. Former Khmer Rouge prison staff have speculated over 30,000 people had been incarcerated, and only a handful left alive. As Pot Pol’s regime continued, paranoia had set in, and as new prison officials came, older ones were also killed, they knew too much.   Walking through the prison,  hearing the stories, seeing the thousands of  photos that line the walls is very disheartening.   And to think, this was only one of numerous areas that this was occurring.  Realizing this was taking place while I was in my early teens was extremely disturbing to me.  I  heard nothing about this genocide until researching this trip to Asia.Some of the below photos are photographs which the Vietnamese took when they walked into the Prison.  The Khemer Rouge had killed the 14 prisoners that were left before fleeing.  These photos were hung on the walls in the interrogation rooms where they victims were found. Those 14 victims were buried in the yard of the Prison.

Not only did Pol Pot destroyed and reduce the population by 1/3 to 1/4  he also destroyed it’s legal and educational systems, the music and arts sectors, trading, business, and everything else was simply gone.  Its only been 48 years since the Vietnamese invaded and put a stop to Pol Pot’s insanity.  The surviving population still remember, they remember the famish, loosing loved ones either to killings, starvation or sickness. They remember the terror and the darkest days and hours of their lives. The children born after 1979, are not free from the trauma that swept the country.  They were and are being raised by parents that are suffering post traumatic stress disorders, in a country where there are no diagnoses.  Rebuilding the country will take generations.  Yet, as we travel around this city, I am astonished with how happy these people are. They are very cheery, and genuinely friendly.  Chum Mey, a survivor was at the prison signing his book as we were leaving, so we did get a copy, and through an interpreter, he did tell a short version of his story of survival, although sadly he lost his wife and baby daughter. (Chum Mey  also speaks in the short videos I mentioned above). 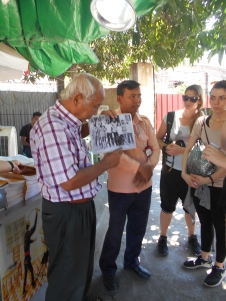 I  considered writing a very short piece about this thought provoking day, and not include any photos. Or just omit it all together.  After all, it is not the happy  day in the park that one associates with a vacation. However, it was important to me to share this experience with you.   Yes, trials have occurred, and  many of the Khmer Rouge members are in prison for life, but there are many still out there, living their lives freely, living next door to victims families, some have remained in government. Corruption is everywhere.  Its hard for me to fathom why so many countries did nothing!  That these murders, and the torture continued for over 3 years – was it because there were no natural resources in Cambodia that anyone wanted, was it because the Americans had just left Vietnam, which to this day is still a question unanswered as to why they were there in the first place, and what about the UN?  I have many questions, and over time may find some persons views on why.  But somehow, I don’t believe there are any  answers that will support why these people were not supported by the rest of the world, when their world was dying a slow and such an inhumane death.

“If the human race ignore atrocities such as genocide, we must surely be joined in guilt”.