Photo a little blurry, but shows I was not the only one looking forward to this wonderful train trip to Hue! 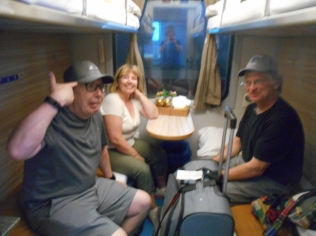 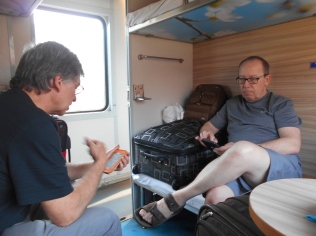 Of course with all our luggage in the berth with us, it was a little claustrophobic.  I picked the lower bunk before we left Canada! With bangs. rattles and a few good shakes, we started  our 11 hour trek south to Hue. It was maybe 2 minutes after getting into the berth that I spotted the first cockroach!  Only spotted 3 the entire trip, although I’m sure there were more.  The German and Irish Girls who were also in our group, and occupied the berth next door seemed to get many more creepy crawlies than we did.   Not sure if it had anything to do with the trail of crumbs we put outside our berth to theirs, but many squeals and scrambling went on for a several hours – personally I think they got some bad bottles of wine. So, first thing our CEO did was turn off the load speaker in the berth, we couldn’t understand them anyways, and no reason to wake every time we pulled into a station.  Then we cracked a beer for a night cap. For anyone that knows me, even a little, its hard to believe that I only had one beer!   I made a trip to the facilities and decided I didn’t ever want to go back, so refrained from drinking any more anything!   I couldn’t believe the people that walked past our berth in bare feet heading for the bathroom – I washed my flip flops shortly after arriving in Hue. Putting it all into perspective, it was not a bad trip at all.  Was able to get several hours of sleep, which is not what I anticipated at all, and it was all part of the adventure.

We thought Hanoi was a busy place, but I think Hue takes the cake.  There is so much to learn about this country, and on every corner you learn a little more.  First thing we did after checking in to our hotel and cleaning up, which was fantastic after our wonderful train ride, which was a short orientation of the city and visited the Tien Mu Pagoda, which at 7 stories high, is one of the tallest in Vietnam, the Imperial Citadel, which is also a UNESCO World Heritage site which was significantly damaged during the Vietnam war. and a Royal Tomb.  The building details are impossible to capture, unless of course you are an advanced photographer, which obviously, we are not.

Then it was on to the motorbikes for a tour!  Having watched them navigate the busy streets in Hanoi, it was a little intimidating.  A surprise awaited us,  it’s one of the best ways to travel about and see the country side. We took, what I thought was back alleys, but they are just  narrow roads.  Bicycles, pedestrians, people selling the wares all use them, and seem to know what they are doing while navigating through them. We went past shops and shops of incense makers. The smell on the streets were overwhelming. We made a stop to watch a demonstration on how they make the incense sticks, primitive,  yet so simple. They burn them all over Vietnam day in and day out, for different reasons, but the mixed smells are always in the air.  Also, in the same shop they made the traditional Vietnamese hats, non-la (leaf hat)  So much work.

Shortly after those demonstrations we left the paved roads for a little dirt path through the trees.  I was  surprised how well the bikes navigated the worn, and packed trails which took us to Bunker Hill.  This area was just recently cleared of land mines allowing tourists and locals alike to enjoy the beauty this hill has to offer. Such a beautiful, tranquil place, with a view of the Perfume River below which was simply gorgeous.  It was hard to stand there,  and imagine the chaos that was experienced by so many young soldiers only 40 some years ago. Needless to say, we stayed on the well treaded paths, and didn’t wander around too much, just in case.

Our lunch break was spent at a convent where the  Nuns prepared a wonderful vegetarian lunch for us all. I would liked to have toured the facility, such a fascinating old building, but it is their home, so I understand. We were not able to speak to anybody there, so I wasn’t happy about not thanking someone for the great meal, and of course the use of their facilities – which were of course Asian style, not sure I’m going to be able to master them!   One other stop we made was at a rice farm where an elder woman showed the traditional methods of separating rice from the husks and different stages between brown and white rice.  She also ground the rice to demonstrate how they make the flour, which of course makes wonderful rice noodles!  For one of her demonstrations she needed a “volunteer”, thankfully it wasn’t me, as she showed us how she would harness a water buffalo, and then yell and use a stick to get him moving to plow  fields!  I couldn’t have imagined that she could yell so loudly. Hats off to Blair who was a great volunteer! 🙂

This pole weighed more than she did!

Loved this rock wall around the Monastery

All Vegetarian of course

Another stop on this tour was to  Ho Quyen.  Built in 1830, this was an arena where fights between tigers and elephants were arranged as entertainment for the Emperor, his family and the commoners.  This was a no win situation for the tigers as they were drugged  so they could be declawed, and defanged  prior to the fight, sometimes they were actually tethered.   If an elephant could not kill the tiger alone, they would send in another elephant to assist.  The tiger is a symbol of evil, while the elephant is a symbol of strength, the Elephant must always win!

Had such wonderful company, and beautiful scenery throughout the day.  The weather was just gorgeous and a driver that knew what he was doing made for a perfect day in Hue! Excited to see what else this country has to offer us as we move on to Hoi An for Day 5.