After leaving Haight-Ashbury we headed North, and a quick stop at the Golden Gate Bridge.  Yes, it is a magnificent piece of architecture.  It took  4 years to build, and 11 lives were lost. The bridge opened in 1937, and at the time was the tallest structure in San Francisco.

We decided to go on a short hike that led us to the  “Torpedo Wharf” constructed in 1908.  Initially  a wharf was built to help with the construction of Fort Point.  Its been rebuilt over the years, and was named “Torpedo Wharf” when the army  put a depot there for submarine mines. They used it to plant underwater mines as part of their defense in the bay.  It was very windy, so we didn’t stay very long, although it was interesting watching the people fish, and crab.  Apparently you do not need a license to crab off this wharf!    We headed back up the hill, and headed towards the bridge.   Along the trail we passed Battery East (1876) and continued through a small tunnel, at which point we arrived at Battery Lancaster (1898).  We elected not to continue on to Fort Point, and turned around heading back to the car.  It was a short hike, but beautiful and now we were ready to get in the car and cross the bridge, North bound.

Shortly after crossing the bridge, San Quentin Prison is off to the right.   Do you remember I wrote that it was “prime real estate”?

We continued north to Geyserville, and then headed west to the coast along Stewart’s Point Skaggs Spring Road, which started off taking us past Lake Sonoma, which was created with the construction of the  Warm Springs Dam in 1982.  The road got crazy after that.  Poor Suzie was getting dizzy, and she actually lost us a few times!  Miles and Miles of rolling hills, and vineyards and wineries.  We didn’t stop at any, wine and the tight corners  would not have made for a pretty picture!

Once we broke through all those corners, hills and dark forests we were welcomed by the beautiful sites of Stewart’s Point and the Pacific Ocean. The point was named after a family which settled in the area in  1856.  The post office was established in 1888, and still is in operation today.  A view of the Ocean! What a magnificent site!  We were so lucky the weather was holding for us.  Although extremely windy, the skies were clear, bright and sunny.   Travelling along the coast with its beauty, also comes danger.  Every dip down to cross a creek, a river, or low lying area the Tsunami warning signs greeted us. Of course, on the other side, when you reached a safe height, they also posted a sign that you were out of the danger area!   Water is such a powerful force.  One can not assume to win against Mother nature should she decide you wont.  Apparently many people do not heed the warning signs and succumb to the fury of the ocean.

When we arrived at the Navarro River, we made a a pit stop and drove a short distance to the Navarro Beach.  Although we were at the Tsunami warning level, we thought we would chance it.   What a beautiful area, with high cliffs behind us and the ocean in front.  The arch is called the Navarro Arch, however, I believe it to be the “Elephant Rock”.   The winds had not yet died down, but the seals didn’t seem to mind. 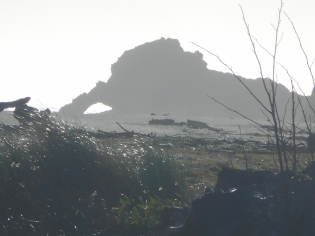 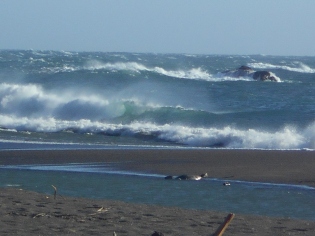 We continued up the coast to Fort Bragg, where we decided to call it a night. This community of approximately 8 thousand was founded prior to the Civil war and was a military garrison, not a fort.  In 1856 the Mendocino Indian Reservation was established, and in   June  1857, a military post was set up on the reservation with its purpose to maintain order on the reservation.  Getting closer to Canada by the day…