We arrived back on the mainland with plenty of time to do  more exploring, and being down by all the docks,  we decided to take a short walk to the famous Pier 39.  Everything imaginable there.  From fine dining to fast food, and lots of places to shop. I’m not a shopper, but we were hungry so we settled on a nice restaurant looking over the water, and the sea lions of course. I did HAVE to pick up a few trinkets for the Jenga house and a couple outfits for the kidlets back home.

Don’t ask me why the photo of the seals is sideways, it is fine on my computer, but uploads this way to word press… but had to include because is iconic of Pier 39!

Then off we went to find the  cable cars. The cable car systems in San Francisco were built in 1873 and are the last working system of its kind in the world. With Electric street cars being brought in around the end of the 19th century, cable cars were beginning to phase out.  The final blow  in the  cable car system was the earthquake in 1906, which damaged a great deal of the cities infrastructure.  However, today 3 routes still run.  We boarded the last Powell – Mason car, not sure where we would end up, but that’s all part of the adventure!  Its not like we were on a time table. It took us 23 blocks, up over Nob Hill and Russian Hill, and past the Sir Francis Drake Hotel to the Mason Market turn table.  We rode on the side, standing, because that is the best views! Although a little jerky at times, it was a fun ride.

From there started walking in the general direction of our hotel.  It was starting to get late, so we thought we would pick up a few cold ones to take back to the room, and then grab a cab.  You wouldn’t think finding a liquor outlet would be that difficult in a city such as San Francisco – but it was. Not sure how many blocks we walked up, and over, but it was many, and as you can see from the photos – its a work out!    Finally we found a place, grabbed some beer, and went out to find a taxi.  I couldn’t believe finding a taxi was as hard as finding a liquor store!  I would never have imagined.  In any case, after walking another 6 blocks or so, I was able to hail a taxi!  Was a little tuckered by this time. Throughout the day  I think we walked at least 50 km !  Back at the hotel, a shower put feet up and enjoyed a few, well deserved cold ones!

The next day its check out time, and time to put Suzie to the test to find Haight/Ashbury.  What a trooper. Parking was not an issue, we parked at the end of Haight Street by the Golden Gate Park Entrance. We arrived early, shops are all still closed and gated up, and the streets were relatively free of tourists – except us ! What a beautiful area of the city.  The morning rush had not started yet, so it made it that much more enjoyable. 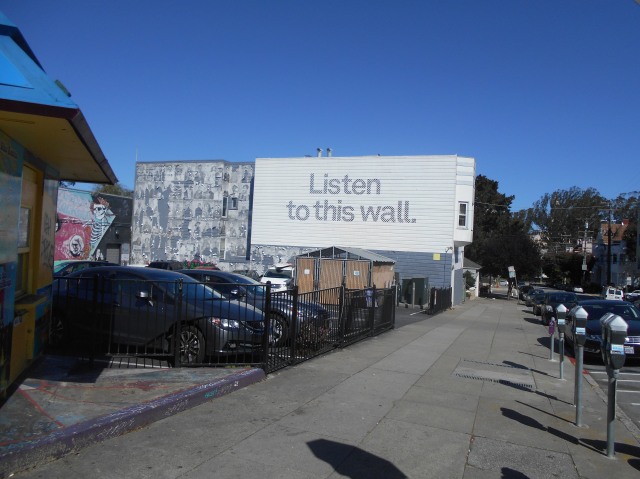 Something to do with bringing a creative antidote to visual “noise” that over powers the urban landscape.

Although the summer of Love was in 1967 – 49 years ago, we still heard phrases such as, Peace out, Far out and Groovy several times while wondering the streets!  Not sure if some of those people were hired props or not.  And just like other cities throughout the world, there were some people just waking up, and it appeared some had been there since the 60’s  still looking for love on the streets!  Yes, back in he day there were shops that openly sold LSD and weed…don’t know about now, but didn’t see any signs advertising it.   Once again, I was amazed at the architecture, it was simply  beautiful, many building being redone, but stayed true to the neighbourhood.

In its time, Haight-Ashbury was a relatively inexpensive place to live, which was enticing to the young people.  The Summer of Love in 1967 was a social event that occurred when at least  100,000 people converged in the Haight – Ashbury neighborhood.   It was the centre of the hippy movement.  The public considered the gathering as a social experiment because of the different lifestyles that these young people chose to live, communal living and of course free love to say nothing about the psychedelic drugs.  It only lasted the summer, as most went back to school, colleges and universities in the fall.  When they left, they took new ideas, ideals, behaviors, and styles of fashion to most major cities in the U.S., Canada, as well as other countries. The hippy movement spread.  Those that remained in the Haight-Ashbury District staged a mock funeral on October 6th of that year to signal the end of the scene!

Flower children, AKA hippies were a very diverse group of people.  Most were very suspicious of the government (and that’s wrong? ) , and openly apposed to the Vietnam war. Politics was an interest with some groups, however the arts, such as music, painting, and poetry were the big interests.  Everyone was ready to try something new, and make it part of their daily lives.  Of course, with so much free love spreading it didn’t take long to attract those that would prey on the naivety and innocence of the young that had flocked to the area.   The Hells angels set up shop  for a time, as did Charles Manson.  It is rumored that the SLA  also had a “pad” there, and Patty Hearst was kept there, against her will of course, after she was kidnaped.

Of course many a musician called the area home as well.  Grateful Dead (who lived directly across the street from the Hell’s Angels) , Jimi Hendrix, Janis Joplin, Jefferson Airplane,  to name only a FEW!  Janis Joplin lived in several different locations over the years. At one point she was only a few houses from the Grateful Dead,  and  the Hells Angels.   Jimi Hendreix was basically on the corner of Haight & Ashbury! 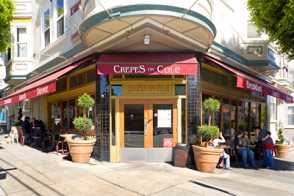 I hadn’t known this before, but some comedians also got their break in the Haight-Ashbury District in the 80’s. It became the spot for the SF Comedy Scene when a  coffee house on Haight and Cole Street called The Other Café  became  comedy club helping to launch the careers of people such as Whoopi  Goldberg and Robin Williams. The building is now named “Crepes on Cole”.

So interesting to have read and heard stories,

to see the movies, and then to see it all up close and personal.  Of course, it wasn’t quite like it was in 1967 – but we walked the walk!  Just couldn’t bring myself to to talk the talk  although we did hear a few of the sayings several times!  Once again, I was a  little late for the time, but another cross off my bucket list.   Its time to leave the time warp.  We’ve left a great deal to do if we ever get back. What we saw, which was only the tip of the ice berg, was in one word – extraordinary!  We’ll head north, starting with the Golden Gate Bridge!