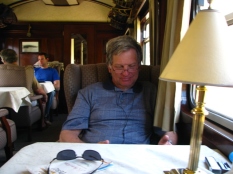 Arriving in Puno at in the dark  was a little disappointing but it doesn’t mean it’s late, it just means it gets dark earlier!   We were picked up at the train station and whisked off to our beautiful Libetator hotel, which sits on an island across the bay from Puno, with floor to ceiling windows, and beautiful views of Lake Titicaca, and Puno.

The next morning, bright and early again, we awoke to one of the most spectacular sun rise. We think it was spectacular, but you be the judge! 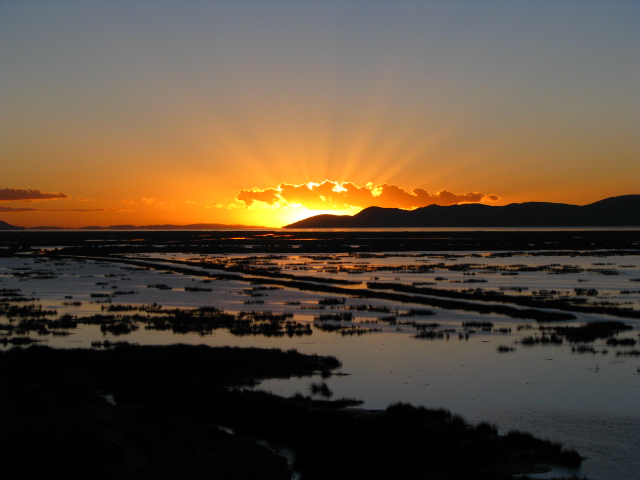 Soon after, we were heading down stairs to catch our transportation to the Pier for our adventure on Lake Titicaca!   First stop, the floating islands of Uros.   We stop on one families island and are given a brief history of the people, and how they came to live on the islands.  The  inhabitants are not scared of modern technology: some boats have motors, and several years ago the government “donated”solar panels for lights, to help prevent “house”  fires from candles,  fires etc.   Of course, being invited to fire some of the houses, it was not hard to miss the occasional TV propped up on a reed bundle!  Yes, a few satellite dishes were also found.   Before leaving that family’s island, the mother, Lucy, was able to convinced me to make a purchase.  I am not as good At bartering as our travel  mate Maureen, but still think I got  a great  deal! 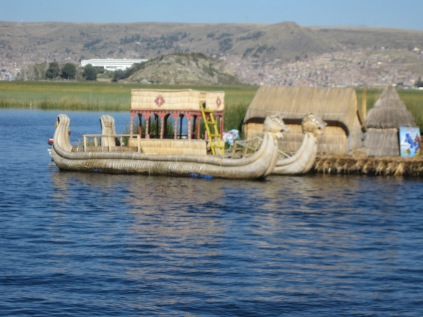 Early schooling is done on several islands,  but high school students, and higher travel to Puno each day.  Back on our boat, and continue on down this huge lake, which we all kept referring to as an ocean, with the  length of 190 km (118 mi) And the Max. width 80 km (50 mi).  Also, pretty deep in spots, depth 281 m (922 ft) so you can well Imagine “cold”.
Arriving at Tequile island had us climbing at altitude once again. The highest point of the island is 4050 masl   with the main village at  3950 masl . You  just can not be In a rush at this altitude, it was so hard to go slow as you know there was always something special just around the next corner, but soon your lungs reminded you that you were climbing at altitude!
About 2,200 people live on the island.  The inhabitants, known as Taquileños, are southern Quechua speakers,  which is such a beautiful language, although some understand basic Spanish    ( like me…very basic).    Once again the weather was spectacular!  So hot, so clear, we were happy for any breeze we came across.  Reaching the top we had spectacular views of the lake, and a fabulous view of the  snow capped mountains of Bolivia!
It was explained this view is generally obscured with clouds, but Not today! I can not believe our luck with weather, and clear skies!
Once we got to the village we sat down at a long picnic table and given our choice of trout, or an omelette for lunch.  All four of us opted for the trout, with a quinoa soup for a starter.

This grain was originated in the Andean region of Ecuador, Bolivia, Colombia and Peru.  We were not disappointed!  while we waited for our food to be prepared, some history was explained to us of the traditional dress, and crafts that are made on the island.  the residence of the island are known for their fine hand-woven textiles and clothing, which are regarded among the highest-quality handicrafts in Peru. Knitting is exclusively performed by males, starting at age eight.
The women exclusively make yarn and weave.  I thought it was interesting that you could tell if a man was married just by looking at the hat he wears, and how many years he has been married by the number of pouches (used to carry cocoa leaves) he wears during celebrations, as his wife will generally make him one each year.  The teachers come from Puno to teach at the schools on Monday and then go home on Fridays. The children,  like everywhere else we’ve been,  wear school uniforms and learn both Spanish and English.  With the island tour closing we climb to the top of the hill where the markets are, and then make a our way to our boat, which has now moved to a different dock, which provides us with another route down, with as you could guess, more spectacular views.  Unfortunately there was some cause for concern as our boats was listing quite badly to starboard side, and the bilge pump didn’t quit all the way back.  At one point, people sitting on the starboard side of the boat were asked to move to the port side so the boat would travel better. With  daylight fading quickly on our return to the hotel, Gus  and I head out for a stroll  along the shore line of the hotel.  What a beautiful evening, with song birds,crickets, frogs, and water fowl being extremely audible, and no traffic sounds heard throughout the walk.  The moon was NOT outdone by the sun as it made its appearance over the horizon!
g 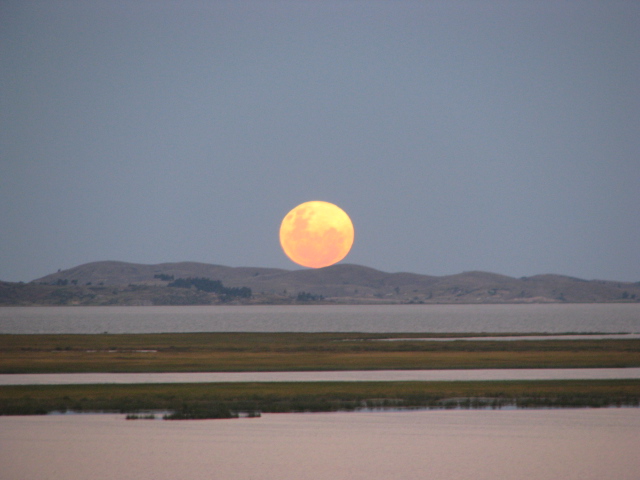 The next morning the driver and escort were once again prompt, and extremely attentive and we made the one hour drive to the airport in the city of Juliaca and off we go to Lima for a one night stay. Marcelo, our driver in Lima, was at the airport once again to transfer us to our hotel in Mirafloras.  We arrived relatively early, so hiked down to the cliffs, where as usual we were awarded with a spectacular sunset.  On the way back  we stopped at a sidewalk cafe for some food, and of course, a few cervezas!  We were told NOT to drink the water anywhere in Peru, so cervaza was a great alternative.
The adventure continues in Paracus and the Nasca lines